I have the pleasure to announce the releases of two new KDevelop versions:

On one hand, there is the new and shiny KDevelop 5.0 Beta 2 release, which brings us much closer to a final release. Tons of issues have been resolved, many features got polished, and even our UI cleaned up a bit here and there. And did I mention impoved OS X and Windows support? See here for more:

Besides this new beta release, which is where most of our effort went into, I am also happy to announce KDevelop 4.7.3, a new bugfix release of our latest stable KDE 4 based KDevelop. Several annoying problems are resolved now, see the announcement for more information:

Many thanks to everyone involved! 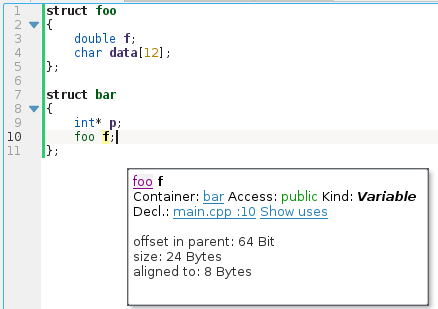 I’m very glad to finally announce the first beta of KDevelop 5.0.0, based on Qt 5, KF 5 and Clang: https://www.kdevelop.org/news/first-beta-release-kdevelop-500-available

Like I’ve said previously, I’m very thankful of the tons of contributors that made this step possible. From the early testers, over the many new KDevelop contributors who helped a lot in porting our code base to Qt 5 and KF5, to the people that worked on improving kdev-clang and all the other areas. It’s a great feeling to finally release this beast. A year ago, just after we started in this process, I still wasn’t too sure we can pull it all off. Now, look where we are :) “Just” a few more weeks of polishing and I’m positively sure KDevelop 5.0.0 will be a really good milestone.

That said, I also want to express my thanks towards the KDE e.V. which graciously sponsored our recent KDevelop/Kate sprint in Berlin. We rented a flat for the 8 hackers that visited Berlin and had a productive five days directly after the Qt World Summit. Personally, I worked on kdev-clang and polished it a bit more in the preparation of the first beta release. One handy feature I added is the display of size information about classes and member variables, displayed in the image to the right.

just a quick announcement: KDevelop 4.7.0 Beta 1 was released! Head over to the announcement on the KDevelop website to read more:

Cheers, see you soon with a KDevelop 4.7.0 stable release :)

After quite some slacking on my side, I’ve finally managed to drop the good news: KDevelop 4.4.0 Beta 1 is released!

Our 4.4 branch already contains some more interesting changes for the next beta, stay tuned. Oh and yeah, we’ll try to release 4.4.0 final sometime in September, I hope.

I’ve just posted the news on the KDevelop website: KDevelop 4.3.0 Beta 2 is released!

Please test it and report feedback as usual. I think it’s safe to assume that we will release 4.3.0 final in about 2-4 weeks from now.

Considering that my university semester is nearing its end, I will finally have more royal hacking time again! I’ll continue to squash bugs and improve the performance of KDevelop of course :) Most definitely I’ll try to further improve the C++11 support. But maybe I finally have some time again to work on “something bigger”, like helping Miha Čančula in writing a kick-ass unit-test integration for KDevelop (see unittest branches). Then I plan to finally release some more of our “playground” plugins, most notably CSS language support and QMake project management…

PS: I’ll step up as a mentor for a KDevelop GSOC this year, yet I’m still wondering about a proper topic… Ideas?

I’m happy to announce the immediate availability of KDevelop 4.2 Beta 2. This is a bugfix release over the first beta release two weeks ago. Every tester is urged to update, any updated feedback and bug reports are highly appreciated.

Highlights besides the usual bugfixes are probably the polished plugin configuration dialog as well as some performance improvements for huge projects.

I’m happy to announce the immediate availability of KDevelop 4.2 Beta 1. This is a testing version and any kind of feedback would be welcome and appreciated. Please use our bugtracker. You can download the sources or wait for your distribution to create packages.

Note: Anyone who runs KDE 4.6 or later needs this version (or any later). This is because the SmartRange interface in Kate got nuked and replaced with MovingRange interface. Many thanks to David Nolden for more or less single handedly porting KDevelop to this new architecture.

I’m happy to announce the immediate availability of KDevelop 4.1 Beta 3. This is a testing release, any feedback is greatly appreciated. But keep in mind that it might exhibit unexpected behavior and eat your children. Please send us your feedback either via one of our mailing lists, #kdevelop on freenode or put general bugs and wish request as always to http://bugs.kde.org.

I was on a spontaneous trip last week and missed the Beta 2 release. Apol took over but my instructions where not clear enough and the packages where totally screwed up (the tags pointed to code in master, no the 4.1 branch).

I’m in the process of fixing things up and will create tarballs for Beta 3 and announce it to packagers later today.

Lets hope the actual release for users out there can happen later this week.

I’ve just released a second Markdownify Beta with better PHP 4 support and some other small bug fixes. You can download it from sourceforge.