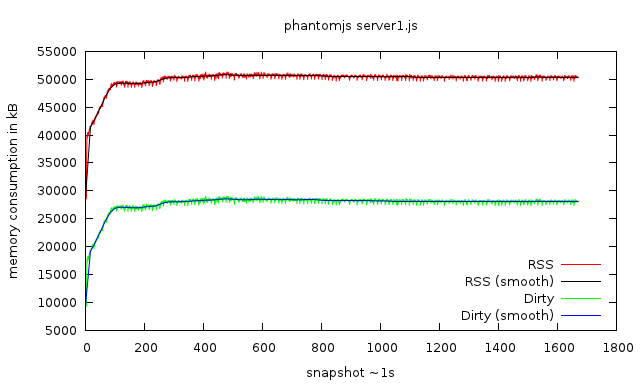 The default timeout is ~1s between snapshots, you can pass a different timeout as second parameter. Bash’s sleep can also take float numbers such as 0.1 to get more snapshots for fast-running apps.

You can also run show_memory.sh mem.log.$(pidof myapp) while you are still tracking the memory. The gnuplot window that appears allows you to update the data intermittently, to zoom in and to create images such as the above.

Note: This kind of memory usage tracking costs nearly nothing, your application continues to work at full speed. Also be aware that this just shows the RSS memory consumption. Massif will always give you better, more detailed and accurate results. Still, I think this should already give you an idea on how your application behaves. If the graph goes up and up, you probably got a memory leak! Then it’s time to run Memcheck and/or Massif to find the issue and fix it!

You can find the most-recent version on GitHub: https://github.com/milianw/shell-helpers/blob/master/track_memory.sh

You can find the most-recent version on GitHub: https://github.com/milianw/shell-helpers/blob/master/show_memory.sh

The above is nice, but I’m wondering on whether one should not add this kind of utility to ksysguard: It already allows you to track the total memory consumption of your system, yet I did not find a way to just track a single application and visualize it’s memory consumption.

Yes, please. These should be integrated.

Nice scripts. I totally agree with you that this should be part of ksysguard. This would definitely increase the awesomeness of ksysguard.